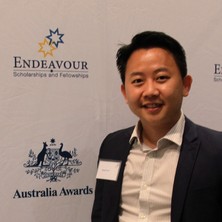 School of Business
Faculty of Business, Economics and Law
r.low@business.uq.edu.au

Dr. Rand Low is an UQBS Honorary Fellow, and is currently based in Wall St, Manhattan, New York City.

Rand has undergraduate double-degrees in a Bachelors of Engineering (Mechatronics) and Bachelors of Computer Science at the University of Melbourne. He achieved a 1st class honours and received a Final Year Projects - Meridian Award in ‘Design & Implementation’. Rand also received a Faculty of Engineering and Melbourne Abroad Scholarships where he spent a year in Canada at McGill University and the University of British Columbia.

During his PhD candidature, Rand has made over 25 presentations on his research on portfolio optimization and correlation modelling at academic conferences, university workshops, hedge funds, proprietary trading firms in the US, UK, Europe, and Australia. He has received ‘Best Paper in Finance’ at the 4th IAFDS conference, UQ 3MT BEL Faculty & People’s choice winner, and GSITA grant that supported him as a Visiting Scholar at the University of Strathclyde in Glasgow, UK in 2011.

Rand received a 3-year postdoctoral research grant from the University of Queensland graduate school and pursued his interests in investigating techniques for minimizing investment risk during financial crises. He received an Australia Award - Endeavour Fellowship and continued his postdoctoral research at New York University - Stern School of Business. As an academic mentor, he also led UQ's undergraduate CFA team to an national #2 position in Australia in both 2014 and 2015.

Rand is currently based in New York. He aspires to bring his Wall St experience back to Australia, and to engage with both postgraduate and undergraduate students of the unlimited possibilities of a UQ education. Rand is a UQ BEL Faculty Alumni Ambassador and is happy to meet with prospective, current students and UQ alumni in NYC. Rand has also worked and published with academics in research areas of interest to the banking industry.

In student engagement, Rand has successfully led the UQ CFA team into the National Chartered Financial Analysts (CFA) Challenge to the finals in both 2014 & 2015 where the UQ team came in an over all #2 nationally.

In 2015/2016, Rand received an Australia Award - Endeavour Research Fellowship and continued his Postdoctoral Research at the New York University - Stern School of Business. Rand worked with Prof. Anthony Lynch and Prof. Andrew Patton on implementing copulas with dynamic portfolio optimization. During this time, he contributed his copula code towards the V-lab (http://vlab.stern.nyu.edu/en/ ) of the Volatility Institute headed by Nobel Prize winner Prof. Robert Engle. During this time, he was also proudly supported by the Australian Institute of Business and Economics (AIBE).

Based on his skills and knowledge in the use of copulas in portfolio optimization and risk management applications, Rand applies his research expertise at firms in Wall St, NYC.