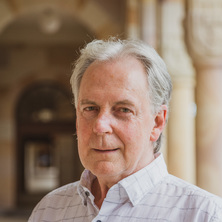 Russell Hinchy currently teaches in the areas of foundations of law and torts. Prior to being admitted to practise as a barrister in 1993, Russell worked in various areas of public sector research, finance and law within the Queensland Government. Since 1994 he has taught in a variety of areas including foundations of law, contract, torts, trade practices and company law. Russell has an interest in company law and is co-author of the text Company Law (Pearson Prentice Hall, Sydney, 2nd ed, 2009). Russell is the author of The Australian Legal System: History, Institutions and Method (Thomson Reuters, Sydney, 2nd ed, 2015). Russell is also the author of Context and Method in Australian Law (Thomson Reuters, Sydney, 2019).

Russell has previously held a Bar Association of Queensland Practising Certificate and is currently a Legal Practitioner of the Supreme Court of Queensland. Russell is also a Fellow of the Higher Education Academy (UK) and a Member of the International Association for Artificial Intelligence and Law.