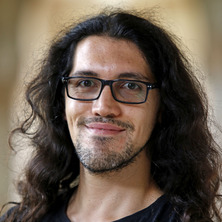 School of Communication and Arts
Faculty of Humanities and Social Sciences
angelos.koutsourakis@uq.edu.au

I am a UQ postdoctoral research fellow at the School of Communication and Arts.

I am the author of Politics as Form in Lars von Trier: A Post-Brechtian Reading (New York: Bloomsbury, 2013), which was reissued in paperback in 2015.

My research is at the interface of film theory, World cinema, modernism, and politics and representation. I have a particular interest in early film theory and the ways that it can help us rethink present debates. My current project challenges Bertolt Brecht’s reception in film studies and reassesses his importance by shedding light on his writings on the film medium, and investigating the currency of his work in World Cinema.

Some of my forthcoming publications are: ‘The Dialectics of Cruelty: Rethinking Artaudian Cinema’ (Cinema Journal 55:4, 2016); ‘Realism is to Think Historically: Overlapping Elements in Brechtian and Lukácsian Theories of Realism’, Ian Aitken (ed) The Major Realist Film Theorists: An Anthology (Edinburgh: Edinburgh University Press, 2016); ‘“The Gestus of Showing”: Brecht, Tableau and Early Cinema in Angelopoulos’ Political Period’, in Koutsourakis, A., Steven, Mark., (eds) The Cinema of Theo Angelopoulos (Edinburgh: Edinburgh University Press, 2015); ‘John Cassavetes: The Ultimate Hero of American Independent Cinema’, in John Berra (ed) Directory of World Cinema: American Independent 3 (Bristol: Intellect, 2015), while I am also working on book chapters on Aki Kaurismäki’s proletarian trilogy (for an edited collection edited by Thomas Austin), and the student films of Lars von Trier (for a collection edited by Rex Buttler and David Denny).