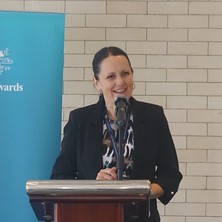 Centre for Policy Futures
Faculty of Humanities and Social Sciences

Greta’s research program builds on the Centre for Policy Futures' Trade, Foreign and Security policy alignment. It focusses on how Southeast Asian states are managing major power contest in the Indo-Pacific and what this means for Australia’s policy choices.

As ASEAN’s leading state in economic, demographic and diplomatic terms, how Indonesia responds unilaterally and through ASEAN-centred multilateral mechanisms to systemic forces catalysed by major power tensions will shape the Indo-Pacific region’s future prosperity and stability. Looking through the prism of Indonesia, Greta’s research examines Southeast Asia’s policy options with regard to increasing competition over regional infrastructure development and the use of grey zone operations employed by authoritarian states in the maritime and cyber domains. It will examine the nexus between domestic political imperatives and foreign policy decision-making in Southeast Asia’s relations with major powers China, India, Japan and the US. The research project builds on an extant body of research examining ideational and institutional shifts in Indonesia’s foreign policy and the impact of domestic political change on Jakarta’s relations with China, ASEAN and Australia.

Greta has served in previous analytical and policy roles at both federal and state government levels. She is experienced in strategic policy formulation, intelligence reporting and assessment, intergovernmental relations and defence diplomacy. Greta has extensive experience working on the bilateral defence relationship with Indonesia and received a Secretary's Commendation for support to Defence Operation Sumatra Assist I & II in response to the 2004-2005 Aceh tsunami crisis. She finished her Australian Public Service career with the Defence Intelligence Organisation as a Senior Indonesia Analyst and continues to utilise her Indonesia country expertise in consulting, research, and international development roles. Greta contributes regularly to media and think-tank analysis on regional strategic, political and foreign policy issues, and engages with policy communities through submissions, dialogues, conferences and executive educations programs.

This staff member is a UQ Expert for media.