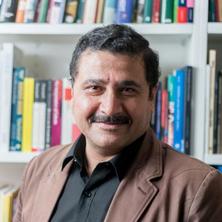 As a recognized scholar and innovative educator, Sobti served as Director of SARUP-UWM’s India Winterim Program (2008-15). This foreign study program worked intensively with local architecture schools in Ahmedabad, Delhi and Chandigarh, allowing students and faculty to interact actively, often within the gamut of the same project. He also set up a similar, research-focused program in Uzbekistan, engaging advanced undergraduate and graduate students to undertake field research at sites, archives and cultural landscapes. In partnership with the Art History Program at the University of Wisconsin-Madison, and SARUP colleagues, Sobti also coordinated the Building-Landscapes-Cultures (BLC) Concentration of SARUP-UWM’s Doctoral Program (2011-13), creating opportunities for student research in diverse areas of architectural and urban history and in multiple global settings. He served as the Chair of SARUP's PhD Committee between 2014-16, leading an area of BLC's research consortium titled Urban Histories and Contested Geographies.

Sobti's research has been supported by several funding bodies, including the Graham Foundation of the Arts (USA), the Architectural Association (UK), the National Council for Eurasian and East European Research (USA), the French Institute of Central Asian Studies (UZBEKISTAN), the US Department of State Fulbright Foundation (USA), the Aga Khan Foundation (SWITZERLAND), the Andrew W. Mellon Foundation (USA), the Massachusetts Institute of Technology (USA), the Centre for 21st Century Studies University of Wisconsin-Milwaukee (USA), the Institute for Research in the Humanities University of Wisconsin-Madison (USA), Stanford University (USA), in addition to city governments in New Delhi/Chandigarh/Ahmedabad (INDIA), Samarqand/Bukhara (UZBEKISTAN), Erzurum (TURKEY) and New Orleans (USA).

Mapping urbanity and its myriad of scalar geographies features prominently in Dr. Sobti's ongoing research projects and fieldwork explorations. He views this examination as a vantage that determines how future urbanists explore the multiplicity of emergent stakeholders within the contentious realms of the historical city with its continually changing meanings. Besides examining place, culture and world-view in the mercurial, Asia-Pacific region of the future, his position also underscores how and why these urbanities serve as a lasting legacy of cultures and peoples, and especially so in settings where urban artifacts frame the memories of space and time.

Dr. Sobti's recent explorations have focused on the urban histories of early-medieval, Islamic cities along the Silk Road and the Indian Subcontinent, with specific reference to the complex, ‘borderland geographies’ created by riverine landscapes. Within a trans-disciplinary examination of medieval Eurasian landscapes straddling the region’s Amu Darya River, he is completing a manuscript entitled The Sliver of the Oxus Borderland: Medieval Cultural Encounters between the Arabs and Persians (expected completion Fall 2020). This unprecedented work on the historical, geo-politics of the Amu Darya, collates extensive fieldwork in libraries and repositories employing multiple Arabic, Persian, Russian and Uzbek sources. The Oxus borderland is also the subject of his ongoing film documentary project entitled Medieval Riverlogues (90 minutes, intended for Public Television) which captures archival research within a re-drawn map series, state of the art computer-generated renderings and live footage on this Central Asian cultural crucible, suggesting provocative connections to our enduring questions on cultural ‘indigeneities’ and identities, sustainability and resources. Mapping and the spatial humanities also remain central to his work on the fast-changing urbanscapes of Delhi, Chandigarh, Ahmedabad & Bhopal, documented in the completion of two forthcoming book manuscripts - the first titled Space and Collective Identity in South Asia: Migration, Architecture and Urban Development (under contract with I. B. Tauris Press, expected Summer 2020); the second titled Riverine Landscapes, Urbanity and Conflict: Narratives from East and West (under contract with Ashgate Press, expected Fall 2019). His continuing work on contemporary architecture and urbanism in the Asia region has resulted in multiple student exchanges, exhibitions and international seminars (2008-15), and a third publication entitled Chandigarh Rethink (ORO Press-USA, published March 2017; see https://www.amazon.com/Chandigarh-Re-think-Transforming-Ruralities-Urbanities/dp/1939621364).