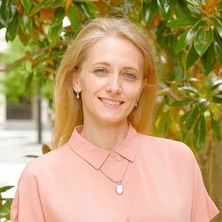 School of Languages and Cultures
Faculty of Humanities and Social Sciences
v.sinkeviciute@uq.edu.au
+61 7 336 56913

I'm originally from Lithuania, where I graduated from BA in English Philology and MA in English Studies. While at university, I spent part of my study period in Spain (Universidad Complutense de Madrid) and Quebec (Université de Montréal). After teaching two years at Vilnius University, in 2012 I started my PhD at the IPrA Research Center at the University of Antwerp, Belgium. Apart from analysing interactional (jocular) practices in terms of (im)politeness in Australian and British cultural contexts, I also explore how identity is (co-)constructed and negotiated in discourse and its link to linguistic diversity.

I have been working with different types of data, including reality television discourse (yes, they made me watch Big Brother!), qualitative interviews (I made [ok, begged] people [to] give me some answers about their interactional behaviour), corpora (no one made anyone do anything here) and social media (people, just keep using Facebook!).

I've always loved languages, maybe because I've always been surrounded by a variety of them. I'm a native speaker of Lithuanian (lietuvių) and Russian (русский), I spent many years studying and then also teaching English and I also have a certificate for teaching Spanish as a foreign language (español como lengua extranjera ELE). Due to my study/research relocations, I can also communicate (sometimes extremely poorly) in Dutch (nederlands), French (français) and Portuguese (português), and at the moment I'm struggling with Modern Greek (ελληνικά) and Japanese (日本語)!

And now my quest for a 'holy grail' theory continues in the School of Languages and Cultures, here at UQ!

Convenor of English as an International Language (BA major)

Among most cited in the journal:

Reviews of my monograph "Conversational humour and (im)politeness: A pragmatics analysis of social interaction":