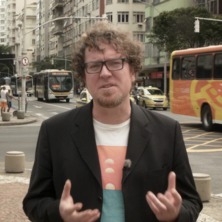 Dr Sebastian Kaempf is Senior Lecturer in Peace and Conflict Studies at the School of Political Science and International Studies at the University of Queensland (Australia) and the School's Director of Research Training for Higher Degree Research.

Dr Kaempf's general expertise lies in the areas of international security, the transformation of violent conflict, ethics and the laws of war, and the role a transforming global media landscape plays in contemporary conflicts. In particular, he has three areas of research interests:

The first concerns the relationship between ethics and the laws of war in the context of the transformation of violent conflict. More specifically, he is interested in the ways in which wars waged under conditions of asymmetry have impacted on the historical and contemporary relationship between the US norms of casualty-aversion and civilian protection.

The second area focuses on the role a transforming global media landscape is playing in contemporary conflicts. It focuses specifically on how conflicts are being waged in and through historical and contemporary media platforms, with a particular emphasis on the geopolitics of cyberspace, embedded news reporting, mass surveillance, non-state armed groups, and the visualisation of warfare in popular culture.

The third area of interest is in the network-state threat posed by the Islamic State to open democratic societies (undertaken in collaboration with Andrew Phillips, Herfried Münkler, and Felix Wassermann).

Dr Kaempf received his PhD at the Department of International Politics at Aberystwyth University (UK) in 2007. He holds a BSc and MSc (Econ) in International Relations from the London School of Economics and Political Science (LSE).

He won the ISA Deborah Gerner Award for Teaching Innovation in 2020. In 2013, he won an Australian national award for teaching excellence (AAUT); in 2012, he won UQ and Faculty awards for teaching excellence. He also the producer (with UQx and edX.com) and convenor of 'MediaWarX', one of UQ's Massive Open Online Courses (MOOCs): https://www.edx.org/course/global-media-war-technology-uqx-mediawarx-0

In collaboration with colleagues from overseas, he co-convenes an interactive webplatform, called www.thevisionmachine.com.