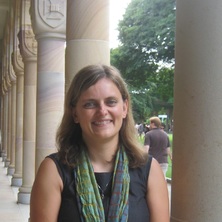 School of Communication and Arts
Faculty of Humanities and Social Sciences
a.bubenik@uq.edu.au
+61 7 336 52184

Andrea completed her PhD at Queen’s University in Canada in 2007, and moved to Australia in 2009 to take up her position at UQ. Her research and teaching is focused on early modern art (especially Albrecht Dürer and his followers), histories of printmaking, links between art and science, court cultures and collecting, the historiography of art from ancient times to the present, and theories of reception. Her books include The Persistence of Melancholia in Art and Culture (edited, 2019), Perspectives on the art of Wenceslaus Hollar (co-edited with Anne Thackray, 2016), and Reframing Albrecht Dürer: The Appropriation of Art, 1528-1700 (2012). Andrea is especially interested in cross disciplinary enquiry, and convened the course ‘Art, Science and New Technologies’; she is currently working on a monograph that explores images that remain unclaimed by the histories of both art and science. She also developed a study abroad option for UQ Art History students, ‘Art and Architecture in Venice’, which takes place on site in Venice, Italy, and gives students the opportunity to experience the city of Venice as their classroom, and to attend the most global of art fairs, the Venice Biennale. In her role as an Associate Investigator with the ARC Centre of Excellence for The History of the Emotions, Andrea curated two major exhibitions at the UQ Art Museum: Ecstasy: Baroque and Beyond (2017), and Five Centuries of Melancholia (2014); she edited the accompanying exhibition catalogues for both. In her curatorial practice Andrea explores the afterlives and migrations of images, and ways of creating and enlivening dialogues between historical and contemporary art.

Andrea has been invited to speak about her research at numerous public art galleries (national and international). She has also given radio interviews on ABC on the porgrams 'Historyonics' and 'Radio National Books and Arts Daily'.

‘Passion and Persistence in the Prints of Albrecht Dürer’. Guest speaker at the Abbey Museum of Art and Archaeology, Caboolture, Australia, April 16, 2011.

‘The Self Portraits of Dürer and Rembrandt’. Guest Speaker for the University of Queensland Art Museum Masterclass for Secondary School Teachers. Oct.8, 2011.

‘Passion and Persistence in the Prints of Albrecht Dürer’. Guest speaker at The Rooms Art Gallery, St. John’s, Canada, November 4, 2007.

‘The Art of Albrecht Dürer in the Context of the Court of Rudolf II’. Guest Speaker at the Institute of Art History (Ustav Dejin Umeni), Prague, Czech Republic, May 5, 2004.