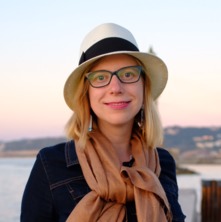 School of Communication and Arts
Faculty of Humanities and Social Sciences
helen.marshall@uq.edu.au
+61 7 336 52999

Dr. Helen Marshall is an acclaimed writer, editor and book historian. Her first collection of fiction, Hair Side, Flesh Side, takes its name from the two sides of a piece of parchment—animal skin scraped, stretched and prepared to hold writing. Gifts for the One Who Comes After, her second collection, borrows tropes from the Gothic tradition to negotiate issues of legacy and tradition. Collectively, her two books of short stories have won the World Fantasy Award, the British Fantasy Award, and the Shirley Jackson Award for outstanding achievement in the literature of psychological suspense, horror and the dark fantastic.

Her research as both as a creative practitioner and a scholar emerges out of the recent interest in “weird” fiction, a sub-genre of fantasy which blends supernatural, mythical, and scientific writing. Using modern theories of cognition, my work posits weird texts as “emotion machine[s]” (Tan 1996) designed to defamiliarize traumatic experiences so they can be more easily managed. Her debut novel The Migration (Random House Canada/Titan UK, 2019) exemplifies this. It finds parallels between the emergence of the Black Death in the fourteenth century and the ecological crises of the twenty-first century—that is, periods when humanity has had to confront the possibility of widescale loss of life. What interests her about the topic is not its bleakness but its interrogation of how change might take place, particularly for young people. The Migration explores these challenges. It initially presents metamorphosis as a major crisis, terrifying in its transfiguration of death. But, as the novel progresses, it shows the potential for hopeful and radical change.

Over the last five years notions of the apocalypse have emerged as a theme in her work. Her second collection, Gifts for the One Who Comes After addressed the shaping and persistence of memory in the wake of dangerous upheaval. Rather than taking the long view of history in my first collection, it negotiated very personal issues of legacy and tradition, creating myth-infused worlds where “love is as liable to cut as to cradle, childhood is a supernatural minefield, and death is ‘the slow undoing of beautiful things’” (Quill & Quire, starred review). Likewise her most recent edited collection The Year’s Best Weird Fiction argues that the techniques of defamiliarization used by contemporary authors such as Jeff VanderMeer and China Miéville offer routes for engaging in an increasingly destabilized world.

She has further interests in both modern and medieval publishing cultures. Her PhD examined the codicology and palaeography of late medieval manuscripts from England, looking at how Middle English “bestsellers” such as Chaucer’s Canterbury Tales and the anonymous Prick of Conscience made use of traceable networks of production and dissemination. This work builds upon the practical experience she gained working in the publishing industry as the Managing Editor for ChiZine Publications, Canada’s largest independent genre press, where she was involved in all aspects of production including editing, marketing and business management. In 2016 she undertook a research project to investigate the publishing history of Stephen King’s Carrie (1974), which provided a snapshot of the changing social, economic and cultural environment of the publishing industry when key editorial and marketing decisions fashioned the King brand.

Her current projects explore worldbuilding, franchise writing, and the application of creative arts methodologies for interdisciplinary and transdisciplinary ideation.

In March 2020, Dr. Helen Marshall and Associate Professor Kim Wilkins launched "Wish You Were Here": Postcards from Future Queensland, a community arts project that empowers Queensland communities to imagine a better future after the Covid-19 crisis, through storytelling. Supported by UQ's School of Communication and Arts, Centre for Critical and Creative Writing, AustLit and Corella Press, this project provides a series of short video lectures and writing challenges, inviting people of all ages across the state, with a particular focus on high school and university students, to contribute short written submissions--our postcards from future Queensland.