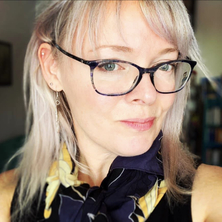 School of Communication and Arts
Faculty of Humanities and Social Sciences
l.bode@uq.edu.au
+61 7 336 51443

Lisa Bode lectures in Film and Television Studies at the University of Queensland. She is the author of Making Believe: Screen Performance and Special Effects in Popular Cinema (Rutgers University Press, 2017), which historicizes screen performance within the context of visual and special effects cinema and technological change in Hollywood filmmaking, through the silent, early sound, and current digital eras, in order to shed light on the ways that digital filmmaking processes such as motion capture, digital face-replacement, and green-screen acting are impacting screen acting and stardom. She has published work in edited collections and journals on the implications of digital filmmaking technologies for screen acting and stardom, the cultural reception of the synthespian, mock documentary performance, and the processes through which dead Hollywood stars are remembered, forgotten, or re-animated. She is currently working on a history of the synthespian and cinematic digital effects, and their reception in the cinema, from the 1980s to the present.

She is on the editorial board for the series Animation: Key Films / Filmmakers (Bloomsbury Academic, and for the journal, Celebrity Studies (Taylor and Francis).