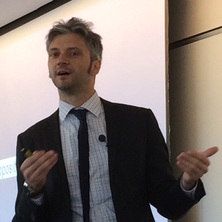 Ivano’s research and practice focus on the managerial implications of Information Security and its repercussions in terms of Governance and Leadership. Ivano is also a keen researcher and practitioner in the field of Design Thinking and Design-Led methods.

Ivano is a Lecturer in Information Security, Governance and Leadership with the UQ Business School. Prior to this appointment, Ivano worked as a Research Fellow with the Adam Smith Business School at the University of Glasgow. During his time in the United Kingdom, Ivano developed his research in the fields of cybersecurity management and design thinking and, among others, was the lead organiser of two editions of the Start-Up Factory, an entrepreneurial initiative aimed at promoting the most promising student start-ups. Ivano has also worked as a Postdoctoral Research Fellow with the PwC Chair in Digital Economy, a team tasked with supporting public and private organisations in their transition into the Digital Age. At the PwC Chair, Ivano was in charge of running Innovation Sprints aimed at producing innovative digital solutions to wicked organisational problems, by applying design thinking methodologies. He currently holds a honorary position as Digital Fellow with this team. Ivano obtained his PhD from QUT, with a thesis that explored organisational vulnerability to safety and security disruptions in Australian international airports. Before his PhD, he was a lecturer and researcher with Bocconi University and SDA Bocconi School of Management (Milan).

His prior professional experiences include, among others, his work as a Deputy Venue Security Manager at the XX Winter Olympic Games - Turin 2006 and his service as a Police Officer with the Italian Police.

An eager snowboarder, Ivano loves soccer, American football, travelling and (when he finds some time) writing novels and poems.