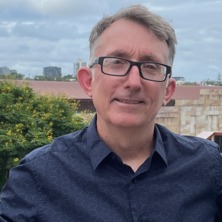 Dr Beebe works in the School of Biological Sciences at the University of Queensland with a 50% position at the CSIRO. His research into the molecular evolution and genetics of mosquitoes in the Southwest Pacific region delivers fundamental knowledge into the role mosquitoes play in mosquito-borne disease. This research moves across both basic and applied research in vector biology and has advanced our understanding of mosquitoes, their evolution, species’ distribution and role in mosquito-borne disease. At a fundamental level this work has answered important questions about which mosquito species transmit disease pathogens, where they exist and why they are there, including how these populations connect and move.

This work has led to new research in developing novel technologies for mosquito control. For example, recent field trials using a Wolbachia carrying sterile/incompatible male releases in northern Queensland provided strong population suppression of dengue mosquito Aedes aegypti. New research funded by the Bill and Melinda Gates Foundation will have us develop a gene-drive malaria refractory Anopheles farauti which is an important malaria vector in our Pacific region.

For more detail on my research please see http://www.nigelbeebe.com